British empiricism functions to allow whatever is happening now to remain unscrutinised, with the effect that Scottish affairs are marginalised, while allegedly unscrupulous practices of so called custodians of the rural economy never appear in the press. 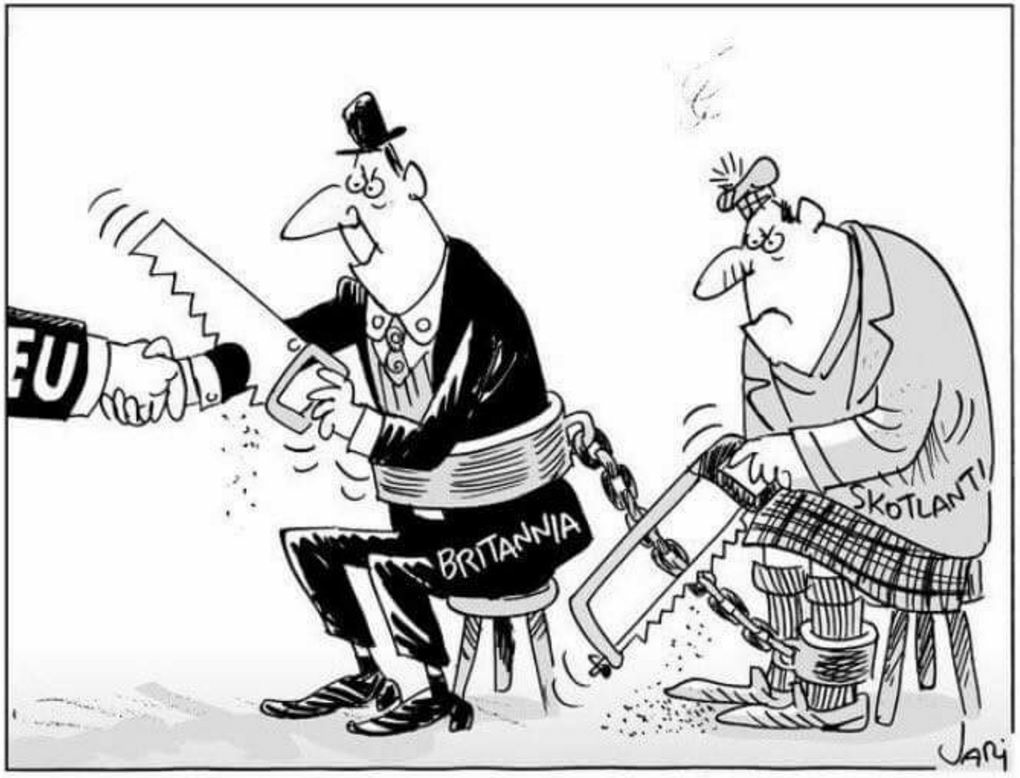 At the time of writing, Wikipedia introduces its article thus:

Perfidious Albion is a pejorative phrase used within the context of international relations and diplomacy to refer to alleged acts of diplomatic sleights, duplicity, treachery and hence infidelity (with respect to perceived promises made to or alliances formed with other nation states) by monarchs or governments of the UK (or England prior to 1707) in their pursuit of self-interest.

Never in my lifetime have the “alleged acts of diplomatic sleights, duplicity, treachery and hence infidelity” of the British state been more palpable than in recent months.

This morning two reports in the Paper jumped out at me. They have nothing to do with the obvious chaos of Brexit, which from the perspective of Europe justifies continued reference to the expression, but they indicate how the perfidy of Albion makes judicious use of a very slow variety of the empiricism I described in a previous post to pull the wool over the eyes of its own populations. Even in Scotland, where we really should know better.

First, in an article on page 6 about allegations that the British Broadcasting Corporation (the clue is in the word British) systematically sidelines Scottish Affairs and excludes Scottish content from its output, the following snippet.

Referring to a review currently being carried out by Ofcom into the BBC’s news and current affairs output, the SNP’s depute leader Keith Brown [….] said it was “no wonder the BBC bosses are under scrutiny” for “continually and consistently” marginalising Scotland.

Ofcom is expected to publish the findings of its review in the autumn.

It takes a long time evidently for this empiricism to see what is right in front of many other eyes.

Secondly on page 21 of the print edition, under a headline announcing figures showing a drop in wildlife crime numbers, further evidence of what can be done with this perfidious empiricism. Recently released official figures for the years 2016/17 record a total of 231 reported crimes, the lowest for five years, with a conviction rate of 96% for those accused, the highest since 2012. After this, a lot of waffle about prevention being the key to combatting wildlife crime and these latest figures being no reason for complacency, quoting evidence given by a Police Scotland representative to Hollyrood’s Environment, Climate Change and Land Reform Committee. Finally, mention of concern that crimes against birds had increased slightly in the same year, despite the general trend.

This is all very well, but it hardly warrants the exuberant headline; figures from two years ago do not signify anything happening in the present, and a more detailed breakdown indicating a rise in crimes against birds might support the idea that this was the beginning of a specific new trend. But we will not know if this is indeed the case until official figures for the subsequent year are released, presumably next year, thus maintaining a two year retrospective blindspot. Again we see this laborious empiricism failing to see what is going on now, and further that gross headline figures from two years ago might actually contribute to obscuring more complex truths.

More reliable and up to date reporting of the extent of crimes against protected birds of prey, for example, can be found at the UK’s preeminent Raptor Persecution site. Here a much more dynamic kind of empiricism is used to paint a more nuanced picture of the actual state of affairs, which points to a clear relation between the extent of crimes against wildlife and the vested interests of the land owning classes.

Official figures then are not only always running behind reality, they enable sub editors to fill column inches with gross data that obscure what is allegedly, albeit very probably, actually happening. Which again would be obvious to anybody proactively seeking out evidence of present states of affairs, and in possession of a full set of senses and critical faculties.

In general, official state empiricism functions to allow whatever is happening now to remain unscrutinised. In the two cases here mentioned, the effects are to ensure Scottish affairs are marginalised by the UK’s official broadcaster, while the allegedly unscrupulous practices of the so called mainstay of the rural economy – canned hunting – never meet the mainstream press.

Albion’s sleight of vision runs deep into the collective unconsciousness.