I climbed a hill last Sunday. Not a big one, but it was a hill, from which there is a view. And what a view it is – epitomised by Kathleen Jamie thus:

It is easy to imagine a Roman general seeing the mighty Tay below as the last insurmountable obstacle to further progress, the edge of the places into which no imperial power dare venture. To the right, more of the same dense forests, hillocks and crags through which his legion has just spent months ploughtering, and then open sea; ahead, on the other side of a wide shifting estuary, layer upon layer of ridges and mountains, deeply forested beneath a horizon of snowcapped peaks; to the left, the squiggly marshes of the Tay, passable – perhaps – only by finding a route through the same difficult country of hillocks and forests, from time to time opening into squelching marshes, always peopled by hostile hunters and farmers, with an ancient connection to the land and no burning desire to be ruled by absent powers.

On a clear day, the peaks of the southern highlands are outlined perfectly from any of the series of small hills along the northern ridge of Fife. The highest is Norman’s Law, which at 285 meters is only sixty-five short of a thousand foot. For me, the thousand feet were not a vertical measurement, but individual footsteps, each carefully placed, heel to toe, first through an empty pasture, every squashy step releasing the odour of the earth, and then through an open gate onto a tiny moor of yellow gorse and thick grass, capped by the remnants of ancient settlements and random piles of stones.

I took these two panorama shots in the summer of 2017 from atop one of the little hills on the ridge.

I am not entirely certain that they are taken from the top of Green Craig, but almost, and they give a good impression of the wide expanse of land visible from any of the hills along the ridge.

Obviously, the land now is very different from how it appeared in Roman times, but it is not difficult to imagine how it once was. Even now it is not easily accessible; public roads are narrow and not in good condition, villages and hamlets are nestled among woods and fields, often clustered around keeps, castles and other ancient buildings, now ruined, probably indicating that these are the places where people have always lived. Today, apart from dwindling farming communities, the people who live around here are either retired or able to work from home. And there is ample opportunity still for others looking for a new start, a place to live that is off the beaten track, while being close enough to major centres of population not to be completely isolated – to the north east, the city of Dundee is prominent. There remain too, many tumbledown and derelict buildings, in fields and copses, ripe for renovation. If only I were younger, fitter, healthier.

This is one of my favourite parts of the world – my wife and I come here from time to time for walks and just to soak it all in; today she helped me climb my first hill since leaving hospital. Little more than a month earlier I couldn’t walk, I was delirious from the morphine, still in considerable pain, utterly dependent on others for everything. And now, last Sunday a short walk over rough ground to the top of a wee hill, helped along by my lovely Shona and my grandfather’s hickory stick. We also had the company of Dutch friends, one of whom is a physiotherapist, who made sure I climbed the only gate on the way with care, and walked mindfully without twisting my torso. 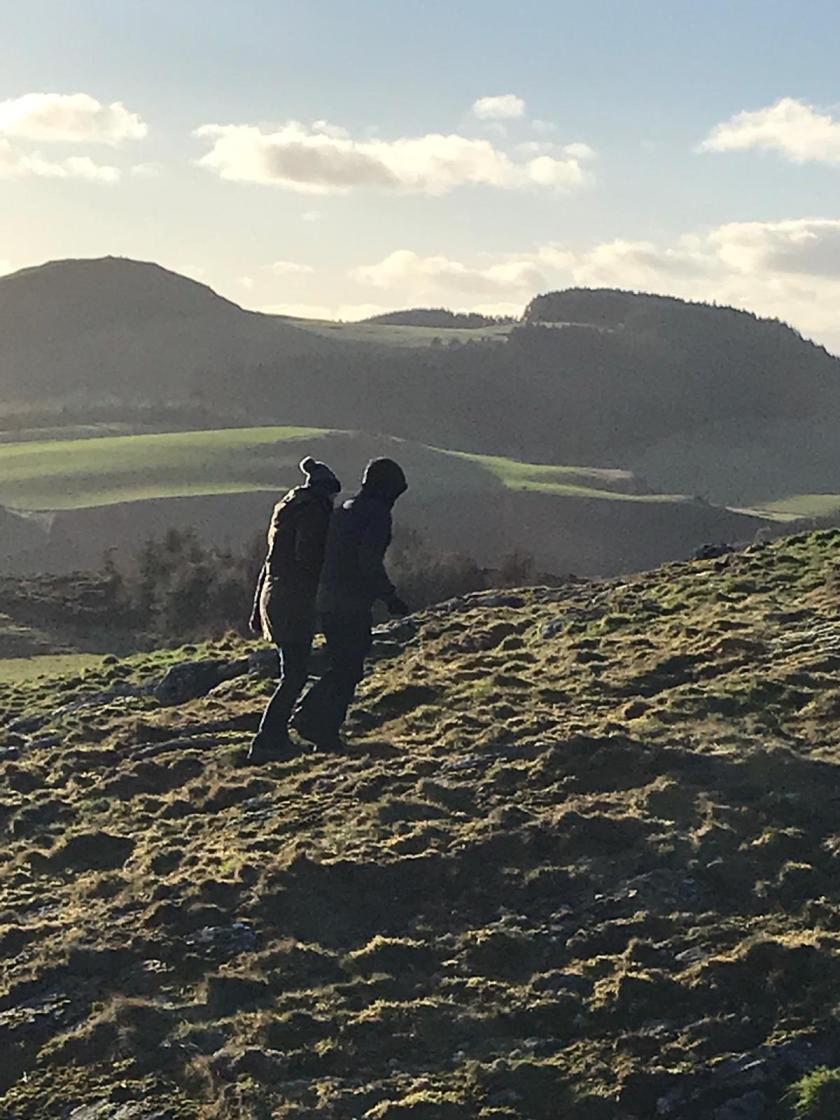 It was cold at the top, with a wind howling down from the far north, and the views into the distance were obscured by cloud hanging over the highlands. I did not stay long at the top for the windchill was extreme, so I began my slow descent alone as my wife and our friends took photos and marvelled at the views. They caught me up soon enough though, and slowly we made our way back to the car, which we had left at Creich Church, now ruined.

So many people have come and gone since Roman times, even Christianity seems now to be in decline, and despite the desperate condition of human history, the land remains the same. The only changes we will ever really know in this short life apart from the natural cycles of seasons, the machinations of power and the rise and fall of empires, are within, motivated only by our agency. If more people understood this, that change begins inside, then the condition of human history would not be so desperate.

Be that as it may, last Sunday I climbed a very big, wee hill and it filled me with as much joy as climbing the most challenging Munro.

Thanks to Mark and Marcia for visiting with such enthusiasm and good cheer, and to my Shona for getting me out and up a hill again.

The ditty above was plucked from the newsfeed on FaceBook.

The Poem Glacial is taken from Kathleen Jamie’s collection The Bonniest Companie published in 2015 by Picador.

One thought on “A very big wee hill”