Which of the 282 currently listed Munro summits qualify as the most uninteresting is a matter of peripheral debate, and arises only because at the edges of the Atholl and Monadhliath plateaux one or two pieces of ground lie above the magic altitude of 3000 feet. These cluster to the north and east of Drumochter, round Dalwhinnie, Laggan, and Newtonmore. Not all of these are utterly uninteresting, but one or two must certainly be added to the shortlist, most inconspicuously Carn Sgùlain, the middle of the three Newtonmore Munros, the summit of which I described in my report of reaching it as: no more than the difficult-precisely-to-locate, highest point of an insignificant lump at the edge of a featureless, seldom visited wilderness. I should perhaps have qualified the wilderness bit, for the Monadhliath is really a very large managed grouse moor, increasingly decorated by wind turbines, only masquerading as wilderness.

Recent medical adventures have left me a bit low on energy. After a couple of days at home doing absolutely nothing, just recuperating and resting, the weather was set to be reasonable to the east of the A9 corridor, so there was a chance to recharge my vitality with gentle walk over the unbagged pair to the east of Drumochter.

I met Martyn and Coll the dog in Perth. It was our first trip out since the end of the winter and a good day to catch up. I was expecting a gentle stroll up a couple of straightforward hills, little did I know that the most challenging moments of the day would be opening and closing the gate accessing the old fashioned walker’s route (not the one recommended in commonly consulted guides), which follows the shoulder to the south of Allt Choire Chùirn.

We parked in a layby on the A9 just south of the junction to Spean Bridge and were through the gate by half past nine. It is a gentle rise through boggy grouse moor onto a boggy ridge and up onto a boggy plateau of burnt orange grasses, peat hags and flowing water, which avoids the crassly constructed track to an old quartz quarry that forms the more commonly used, northerly access to the plateau. On the way we saw what might have been the remnant of recent snowfall nestling inaccessibly under the lip of the plateau, but it might also have been a lump of quartz.

We reached the first summit just after eleven. When I say summit, I mean the place on the flat expanse of soggy ground that was graced with chameleon like trig point ringed by large lumps of quartz. In the near distance to the east there was what appeared to be a higher, more prominent piece of ground. We checked map and GPS and confirmed that we were indeed standing atop A’ Bhuidheanich Bheag; the top in the distance was Glas Mheal Mhòr, only six meters lower, with a dip of only sixty between. And yet a salient feature! To the north, the next alleged summit was visible only as the edge of the first horizon on the other side of a swirling mess of peat hag, boggy grass and nascent burns. Beyond the horizon of the plateau all around, we could make out the shapes of familiar peaks as they blended in and out of hazy shrouds of cloud.

We ate lunch at a pile of stones by the meeting of two waters, which upon closer inspection had once been some sort of small building. Coll the dog shivered patiently as the sun came out, no doubt keen to get back to the job of showing off to the local hares that he had no chance whatever of catching them, but was keen nonetheless to do his best. This was the first place we had found since the start of our walk where it was possible to sit, a little gully carving off the plateau, providing a degree of shelter, with the firm ground of a river bank, rocks and so forth. 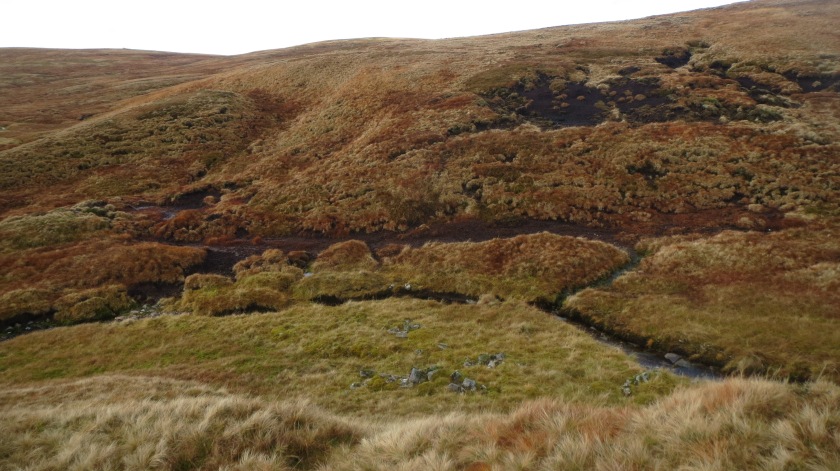 After lunch we plodded onwards to the top of Carn a Caim, admiring the smaller beauties in the landscape, the intensity of colour, watching the many grouse, hare, too-small-and-far-away-to-identify birds, and once or twice ravens. We arrived at the summit at about one. Again, the only reason we were able to ascertain that this was indeed the summit was the cairn.

Happily the views to the horizon were opening up a little, although the high tops of the Cairngorms and Atholl remained obscured by cloud. To the south, the Drumochter cluster and Schiehallion; to the south west, Ben Alder and the Laggans with glimpses to the back of Glen Coe through the gaps between them; to the north Strathspey, bathed in lowering sunshine, intensifying the colours of the land, vibrant ochres clashing with fields of greens, orange blazing still in hibernating woodlands.

We passed by the quartz quarry and picked up the crassly constructed access track. After a few hundred meters of this, we veered off to find the remnants of an old walker’s path, more closely following the shoulder to the north of Allt Coire Bhotie, with a fine view of its deep ravine and eventually meeting the access path to a row of grouse butts. We were back at the car not much after three.

I do not imagine that any pair of Munros could be any more boring than these; the landscape is featureless and only made interesting by light, colour and attention to very fine detail.

In bad weather, reaching them would undoubtedly become a lot more interesting; navigation would be a continuous challenge. Finding the alleged summits even in broad daylight depends on locating first a grey trig point garnished with mucky quartzite rocks and then a small pile of stones no more than a meter high with an old metal post sticking out, both on essentially flat empty ground.

Taking a wrong turn off the plateau would lead deep into rarely visited glens, a very long way from the road. Some of the burns pouring off the plateau cut deep precipitous clefts before meeting broader rivers. And in the depths of winter with an open sky and many degrees of frost, I could imagine that although the views would be sublime, even then doubts would be raised about the precise locations of the summits. For this they qualify as the most boring Munro summits I have to date visited. And yet …..

Thanks to Martyn and Coll for another splendid day out!

2 thoughts on “The two most boring Munros?”