I tried very hard. Really I did. Not to go into the mountains.

But just as sometimes the weather is too bad to go, sometimes it is too good not to. 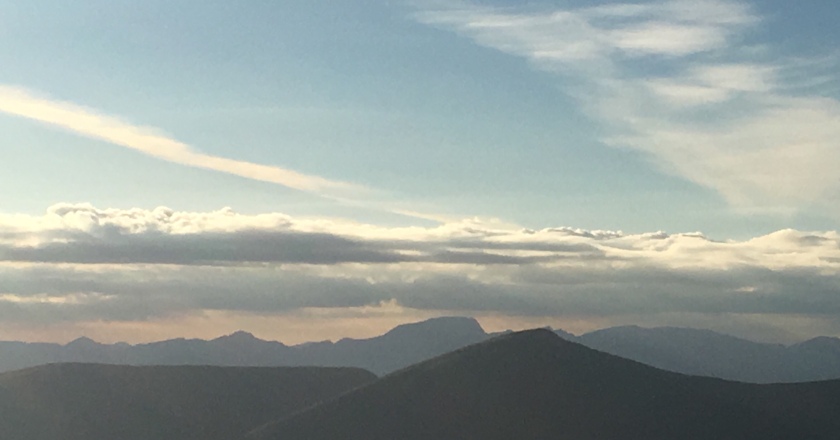 After all the clambering about over rocks, the heights and ridges of recent months, where better in this everlasting summer than the last unbagged pair in the grassy southern highlands, mountains I have been saving for exactly a moment such as this. Green and lush with easy gradients and many summit camping opportunities, from which to view the infinite colours of night.

The most common route of approach is from the end of Glen Lochay, which is where I started two years ago, planning to climb the pair, but the weather turned bad and so I climbed Meall Glas instead.

Many, many years before this, with a party of colleagues, I climbed Beinn Heasgarnaich in a blizzard of spindrift blowing down off the summit, crunching through thick frozen snow all the way from where we had parked at the highest point on the road to Glen Lyon you are not supposed to drive over, way back before there was a big sign at the Glen Lochay end saying that this road is not suitable for regular vehicles and not open to the public. I came over it all way for the last time, about four years ago from the Glen Lyon side, where still the only sign by the road, apart from a cul-de-sac notice ten miles earlier in Bridge of Balgie, is a warning about lambs on the road – no mention that it is unsuitable or not open to the public. On the way down into Glen Lochay the asphalt has been washed off the surface at the steepest hairpins, making the road indeed very unsuitable for regular vehicles.

Whereas, at the Glen Lyon end, after a wee bit of asphalt breakup on the initial climb out of Pubil past the dam, the surface is good all the way to the highest point, and there is parking space aplenty on the verges, with easy access to the north eastern water courses, peat hag and boglands of Beinn Heasgearnaich, which under current conditions are as dry as a bone. It is a more attractive approach, although getting there means at least twenty miles of single track road.

I packed my rucksack for a night out and left home aiming to walk away from the car between six and seven. Although it is very long, the drive to the end of Glen Lyon is sublime. Myriad greens expanding voraciously in the heat, trees swaying gently in the east wind, livestock munching lazily in thick pastures, changing gradually to regenerating woodlands and managed estate land, garnished with bracken, birches and highland cattle, and finally big red pines and open hillside. But the vibrance of the colours is bleaching under this sustained sunshine, the level of water in rivers is down and snowbanks are evaporating rapidly from the highest crevices, thereby depleting sources.

I parked on one of the aforementioned verges and walked away from the car at about quarter to seven. It was incredibly dry. Many burns are simply empty. Mud is cracked. Moss is parching. Two hours later I was standing on the summit of Beinn Heasgarnaich deciding where to pitch my tent. I found a spot just under the summit bulge on a plateau of grass and moss, scattered with sharp stones and little outcrops, offering open views of the northern sky.

It did not get dark really. No star studded sky; on the northwest horizon assorted deep shades of cerise, pink and orange burst through under a bank of cloud hanging over Lochaber; the sky directly above, light blue darkening into violet to the south. When the sun went down the wind dropped to silent.

I fell asleep easily, but awoke frequently to gaze in awe at the life of the mountains, at mists forming in glens beneath, at high cloud slowly changing colour as the sun dipped behind the north pole. From time to time a ptarmigan croaked or a sheep bleated. I am afraid that both the camera on my iPhone and my old Canon Ixus are inadequate to the task of adjusting aperture, focus and shutter speed so as to capture images of this miraculous light show. At sunrise mist had shrouded my camp, which blew off quickly as the air started moving again, to reveal pure clear sunshine bathing the mountain tops all around, burning off the dew.

It was a two hour walk to the summit of Creag Mhor over dew soaked grass. On the broad ridge of Heasgarnaich I startled a flock of ptarmigan, sheep looked at me, baffled. 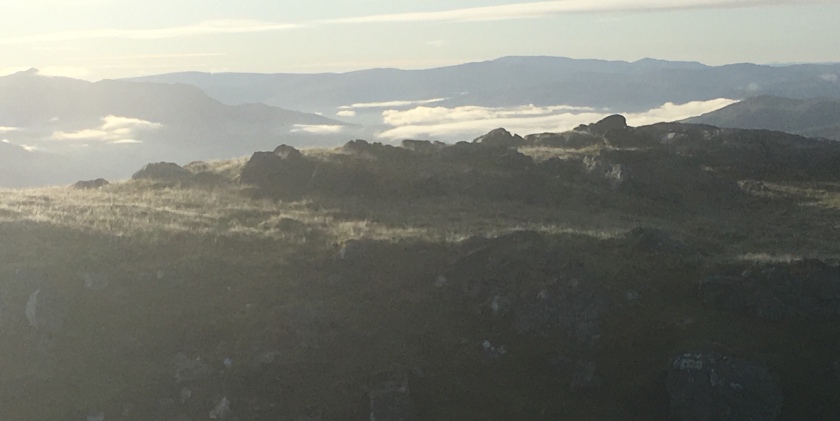 On the steep and sporadically pathed descent to the bealach between the mountains, I startled a small herd of deer. We looked at each other for a while before they decided that I was obviously a danger and ran off. The climb up Creag Mhor is straightforward and much wetter than the ascent of Beinn Heasgarnaich. The snowbanks on Heasgarnaich are all gone, while there is still a little bunch under the northeast buttresses of Creag Mhor, feeding burns with meltwater. 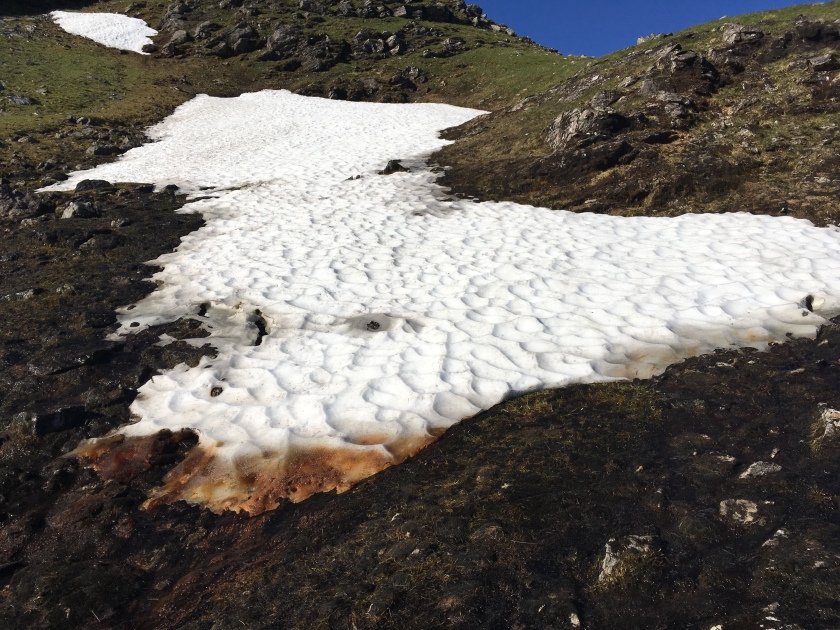 I was at the summit of Creag Mhor before nine. I looked around at a familiar geography. This summit marks the compleation of OS Explorer 378; from here I can name all I see, remember when I climbed them all, recall their characters. These two hills are quite isolated, nondescript and concealed by the peaks of Orchy to the west, and do not present any easily distinguishable profile from a distance. But the views in all directions from their summits go on forever.

The air was so clear I could see as far as the Cairngorms; even to Kintail and Affric, nestling in a gap between The Easians and The Grey Corries; to The Lomond Hills in the east and Ben Lomond behind the Trossachs to the south.

I was back at the tent before eleven, where I ate a late breakfast and packed up lazily for the descent through drumlins, dried up peat hag and parched water meadow. At one point I knelt to take a photo of a pattern of cracked mud, scattered with hoof prints. My knee remained dry! 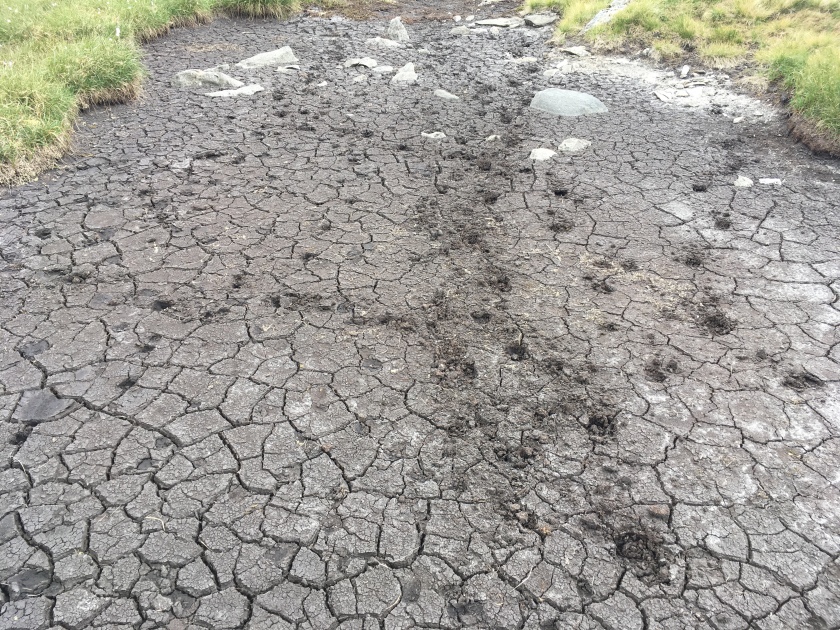 Had I not only had food for one night out, nor had to work the next day, I would have stayed out longer to enjoy this weather while it lasts. I could have kept walking for days, as I once did, finding each night a new place for my tent, carrying my home on my back. But alas. Work tomorrow.

Coming off any mountain these days brings with it a growing sense of achievement. The tick list is now looking more ticked than unticked; red patches on the bagging map are turning blue. It is now exactly four years since I made my first expedition into the hills after returning from living abroad, still recovering from a course of intense radiotherapy, still believing that my death was imminent. From my camp I could see the mountains I climbed then; Ben Alder particularly clearly next to Loch Ericht, with the Monadhliath and Speyside behind.

This intense four year journey has emphasised a profound sense of place, of belonging and an enormous love. This landscape, these mountains, the experience of walking among them are part of who I am. These are friends who have supported me through the hardest of times, and who will continue to be there into whatever future lies before me.

We are privileged in this country to have access to the land. Some say it is our right, and so indeed it is, for nobody should be prevented from wandering in these mountains if they have the inclination to do so. But a right is not a natural condition, it is given by law, and exists only to prevent denial of access, it is a double negation rather than an affirmation. The privilege is to understand the profound relationship that can exist between beings and the landscapes they inhabit. Civilisation and society have persuaded humanity that it is better to be separate from nature, to be subject to orderly, organised and constructed practices and procedures.

The sheer mass of humanity on the planet makes society necessary, but this necessity has let us too easily forget that we are also animals, subject to natural cycles of day and night and of the seasons, living on a small planet, spinning on an axis, tilted at an angle of 23 degrees to the perpendicular of the plane of its orbit round a nearby star. This is the contradictory condition of being human; too often misunderstood, ignored, denied, fought over. We are all both animals and civilised members of society; there is no better way of celebrating this fact than spending the night on the top of a mountain, protected by technical clothing and special equipment, living with the revolving planet as the infinite impermanence of things moves on.

9 thoughts on “…. the infinite impermanence of things”