Motivation has been low these last couple of weeks. The apparent change in prevailing weather patterns from westerlies to easterlies, apart from contributing to my being laid off, has enveloped Fife with low cloud and cold air. Spring does not yet appear to be imminent, green is hardly a feature of fields and woods, and sunshine is a rare event. The rest of the country too is shrouded in cloud, with the best of the weather in the far west, just a little bit too away for a day trip at this time of year. According to forecasting sites, the best place for broken cloud this week was to be on the west coast north from Mull and south of Kintail, with the chance of open tops increasing towards the end of the day.

I left home at about 8:45 and was walking away from the car at 11:15, hoping to be at the first summit at 13:00. Both the SMC guidebook and Walking Highlands recommend a clockwise route round the Dalmally Horseshoe, with a traverse of the ridge from west to east. Looking at the altitude profile of this, I could see that it involved a very steep descent at the end of the day, which I always try to avoid if possible – out of compassion for my knees and toes  – so I decided to do the same route in the other direction.

After a short flat walk trough farmland, the track rises quite steeply round the edge of the south shoulder of Beinn Eunaich. A mile further along the track, I struck right up the steep grassy hillside, keeping my eyes peeled for some sort of path. Luckily the ground was much drier than I had expected and was firm underfoot, otherwise it would certainly have been slippery and more dangerous. I found the path only when I got onto the top of the shoulder, sometimes obscured by snowbanks pockmarked by boots and walking poles.

I walked into cloud at about 750 meters. The intensity of the white was not so overwhelming as on Carn a Chlamain; the cloud was thinner, there were many rocks protruding through the snow and bare patches of ground against which to orientate. The summit was however more or less completely capped by snow – although navigating was not a problem because of the others whose boots had left traces. At the top, the cairn appeared to be not at the highest point, but because of the ambient white it was difficult to judge, let alone photograph. I walked a little way towards what seemed to be a point higher than the cairn and soon decided to walk no further. For just visible was the slight difference between the white crest of a cornice and the white of background cloud. From the map I could see that beneath the lump of snow protruding above the summit was a big fat nothing.

I checked my bearings carefully as I headed off the summit. The cornice became an eerie companion along the rest of the ridge, always reminding me that I should not stray too far to the right, lest I disappear into an avalanche. It was relatively easy going though. I emerged from the clouds at the bealach, where I got views into the glens below and saw just how deep is the cornice clinging to the north of the ridge.

The ascent from the bealach to the main ridge of Beinn a’ Chochuill was the trickiest section. It is steep and rocky and the path follows a line more or less at the junction of snow and rock. Here, I replaced walking pole for ice axe, just in case.

Once onto the ridge the going was easy again, along an obvious path all the way to the summit, which again seemed to be lower than the protruding cornice. Having carefully worked out how to retrace my steps and navigate off the summit in order then to branch off at the right place to the path off the ridge, I found myself following footsteps that took me exactly in the right direction. I emerged from the cloud at a large boulder affording both shelter and an excellent view of the cornice on the western ridge of Stob Daimh on the other side of the glen, garnished by wispy cloud and sunlight.

I sat here awhile, preparing for the descent. 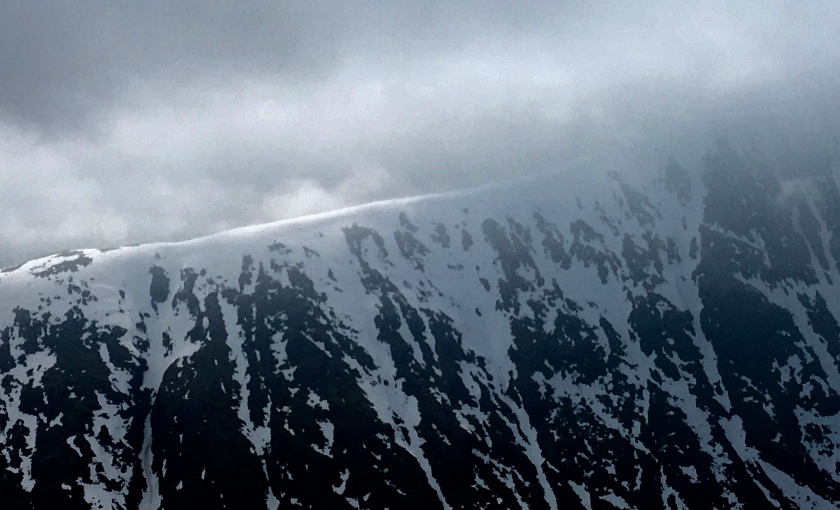 The path down was good, albeit steep in places. At the track I yomped back past flocks of expectant ewes surveying me knowingly as they munched on hay and licked high energy paste from big red buckets.

I would have preferred views of Etive and The Trossachs, and of the back edge of the Ben Cruachan traverse, and as I descended I could see more and more blue appearing in the skies around, but every top continued stubbornly to hold onto its cloud. So it was not to be.

It has been a good winter, but I look forward now to lengthening, warmer days, with less cloud and some sunlight to motivate me.

3 thoughts on “The Dalmally Horseshoe”