I am often asked which cancer charity I prefer to see supported. My answer is always: Maggie’s Centres.

Maggie’s Centres offer by far the most immediate and practical support to anybody affected by cancer – not just those diagnosed with the disease. Although from a certain perspective, speculative research funded by CRUK – for example – might one day contribute to cancer therapies and medication, it is much more helpful to actual cancer patients and their nearest and dearest that there are places they can go to seek practical advice about everything from finance to psychotherapy, and to meet others in similar situations to themselves. Maggie’s Centres do not offer the hope of cure with research, rather they provide comfort and support in pleasantly designed spaces in the grounds of most major hospitals, where often they are an oasis of calm ordinariness and humanity in the midst of white coats and bureaucracy.

As I mentioned, recently I got married. At our request, our guests made generous contributions to Maggie’s Centres. The Donkey Box bar also donated a percentage of profits. We raised well over £100.

During the week before the wedding, I was presented with a number of challenges, not the most insignificant of which was a nasty tear in the arm of my lovely Rab Electron down jacket, which has served me well throughout the season and which I had recently cleaned in preparation for the next. 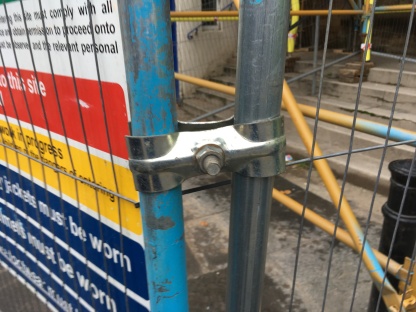 As I walked past a fence round a site in the centre of town and moved to avoid a passer by, I felt the horrible ripping and knew the damage was serious. The men on site immediately acknowledged that the fence bolt had been incorrectly mounted, with the rounded end on the inside rather than the outside, and went to work correcting it. A sticking out bolt like that could take out the eye of a shorter person than me. They suggested too that I seek compensation for the jacket from the scaffolder.

To cut a long story short, the scaffolder was not entirely cooperative, but Len Reed of Reed Insulation, the roofing company contracted to do the work requiring the erection of the scaffolding, took responsibility, and I was the proud owner of a brand new Rab Electron down jacket within a week. Mr Reed admitted to being a size or two too big for the old jacket and kindly gave it back to me to see if I could salvage it, and I told him about my plan to auction it off for Maggie’s. Many thanks to him and his staff for their time. (The company gets very good reviews on Google, so if you ever need your roof sorted, give them a call.)

After asking around on the internet for the best method of repair, I obtained a roll of Tenacious Tape and have made a reasonable job of repairing the jacket – it is now functional, if not very pretty.

So, in order to increase the pot of cash we raised for Maggie’s Centres at the wedding, I am offering the old jacket for sale.

At the time of this writing the highest bid is only £45.

I am sure though it is worth at least three times that.

It was also suggested that the highest bidder, having received the jacket, should donate it on to somebody in greater need than themselves – like a homeless person. Which would be a highly charitable act, the idea of which might even push up the bidding.

The size is UK small, the colour blue. Apart from a recent repair, it is in very good condition.

One thought on “A RAB down jacket for Maggie’s Centre”