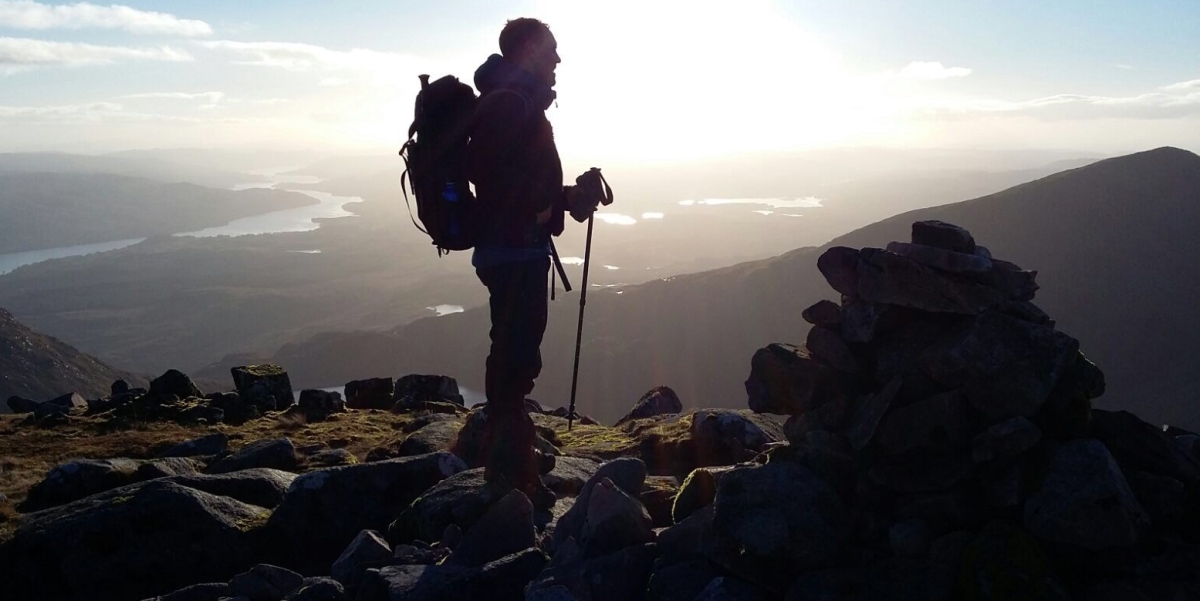 It is now more than five years since I was told in no uncertain terms by a senior urologist working at the Diakonessenhuis hospital in Utrecht in The Netherlands that if I did not take the medication he was prescribing me, I would be dead within a year, and that even if I did, I would likely be dead within three. Another urologist, working at the Wilhelmina Hospital in Nijmegen, who some weeks later offered a second opinion, suggested that three years was maybe a bit pessimistic, adding that five was more likely.

It is not easy to describe the feeling of bursting through the prognostications of medical science. This is my third now. The first when I was still alive a year after refusing to take the aforementioned urologist’s advice; the second two years after that, having received a more careful assessment from urologists at The Edinburgh Cancer Centre and a more tailored treatment; and now this third, having lived for nearly a year free of pharmaceuticals, looking after my health using only natural remedies and supplements, nutritious food, stimulating interactions with interesting people, climbing mountains, writing about my adventures, Buddhism and love.

Ever since my remembering of the future in the glen between Beinn na Lap and Chno Dearg in the summer, I have been gradually coming to terms with the fact that the determinism of medical prognostication is more statistical than actual, thereby pulling myself away from an internal abyss and looking forward to a new life with new adventures. For the last two months my better half and I have been organising our wedding, which happened last Saturday, almost five years to the day since the second opinion gave me only five more years to live. I cannot think of a better way of smashing through that particular prognostication; for it was the most wonderful day of my life!

On the Sunday before the wedding, the first day of the return of GMT to the clocks, there was a weather window coinciding with nothing in particular to do, and so I took a trip to Argyll with a trusted mountain buddy, into the heart Campbell country to climb the big mountain there. Some men have stag dos in foreign countries involving huge amounts of alcohol and outrageous behaviour, some do the same thing at home. Given that I have never been much of a drinker and that now for reasons of health I take no alcohol at all, climbing Ben Cruachan with a mate and whoever else we would undoubtedly meet along the way, seemed like the perfect preparation for the future with my lovely woman, who is after all a Campbell.

What a magnificent mountain this is. And what an auspicious journey!

I had arranged to meet my companion at a car park en route, sometime between 7:00 and 7:15. We arrived at exactly the same time and left again promptly. At the parking spot on the road near the Cruachan Visitor Centre, we squeezed into the last space and began climbing through the woods at about 9:15. We clambered over the dam just after 10:00 with very muddy boots, and a sense of relief that we would be walking on the level for a while. The great bowl of the corrie, bright and benevolent, hanging with wispy cloud, opened up before us. It was already a great day out. 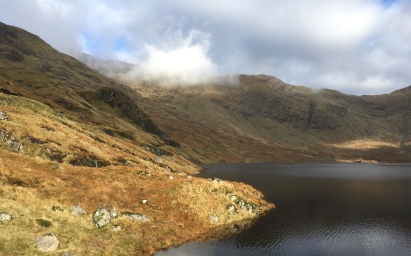 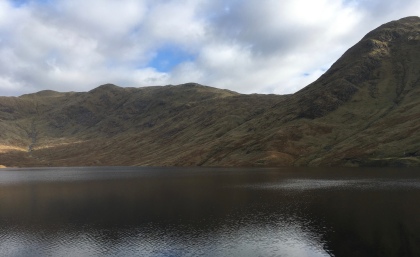 We stopped for our first break at 11:00 by some rocks on the path up to the bealach, along which in both directions parties of happy mountain people wended their way. It is a straightforward climb from the bealach along what tuns out to be the most rounded ridge to the summit. We arrived at about 12:15 to a veritable crowd of folks sunning themselves with lunch in the still autumn air. A pair of ravens wheeled and cawed at each other, playing in eddies and updrafts, plummeting past the edges of crags and cliffs, showing off to the humans watching how awesome it is to be a raven.

The views from the summit of this magnificent mountain are incredible and were to me unfamiliar. Since I returned from The Netherlands in 2013 and my first sojourn into the hills in July 2014, I have been looking at peaks I could now see in the north and east, only from the north and east. This summer I concentrated on bagging everything in Laggan and round Loch Treig and I have nearly completed the peaks of Glen Coe. Throughout, I have been looking at the Etive Hills on the western horizon; from Cruachan, Etive was behind me renewing the view of the east, while the horizon before me was filled with a glistening mosaic of low hills, lochs, coastlines and islands under sunlight filtered by wispy clouds. From this angle, the length of Loch Awe is crimped to a short squiggle. Mull and the might of Ben More are far away on the horizon, Sunart shimmers into Lochaber. The Nevis ranges, Mammores and Bidean nam Bian meld into a great jagged lump in the north to the left of Ben Starav; likewise Bredalbane and the Trossachs to the south and east, with Ben Lui and Beinn Buidhe prominent in the foreground. 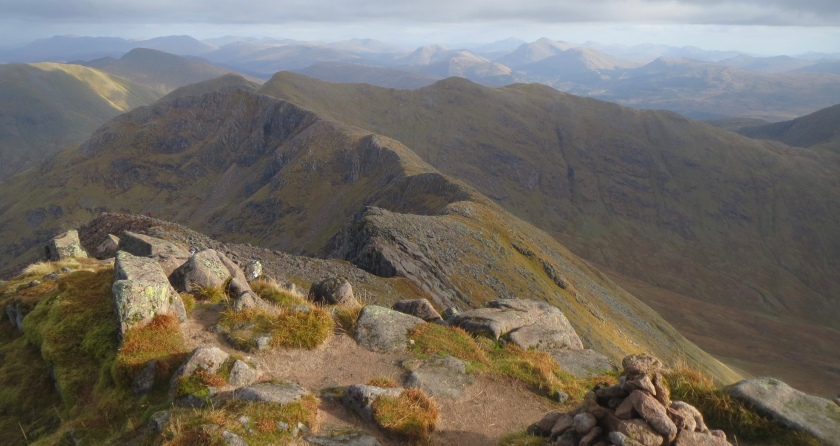 After lunch we took the path off the summit along the ridge towards Stob Daimh and soon discovered what an absolute delight and privilege it was to be here on this mountain on such a beautiful day as this. It is nowhere near as scrambly as the Aonach Eagach, but there is section of traverse over slabs that requires particular care, and it is as precipitous on both sides. It is nowhere near as randomly stony as the route between Conival and Ben More Assynt, but there is very little earth and it is a much longer walk. Along the way there are a number of subsidiary tops from which the drama of the ridge is palpable, the last of which – Drochaid Ghlas – affords splendid views back to Ben Cruachan and forward to Stob Daimh. 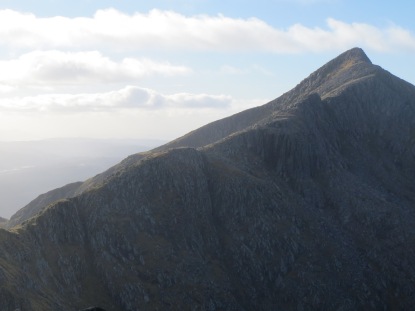 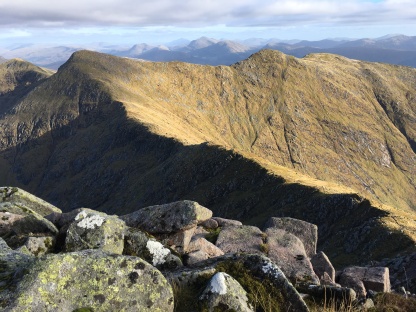 On the way down from this top, just as the path begins to level off, the ground changes from predominantly rocky to predominately earthy. It is a clear difference on the ground that justifies Munro’s insistence that only mountains with a separate character should be classified as separate summits, even if they are lower than the minor tops of immediate neighbours. The path to Stob Daimh is straightforward with a wee steep bit just at the end. We reached the summit at about 15:00 – my 50th summit of the year, 132nd since the diagnosis and 142nd during my lifetime. So I am now half way to compleation. We did not hang around for long here though, for we soon realised that we would have to make good time on the descent if we were to get back to the car before dark. 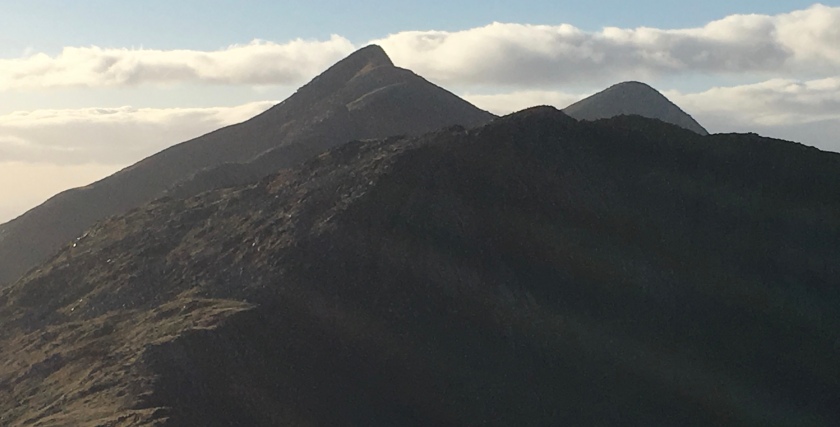 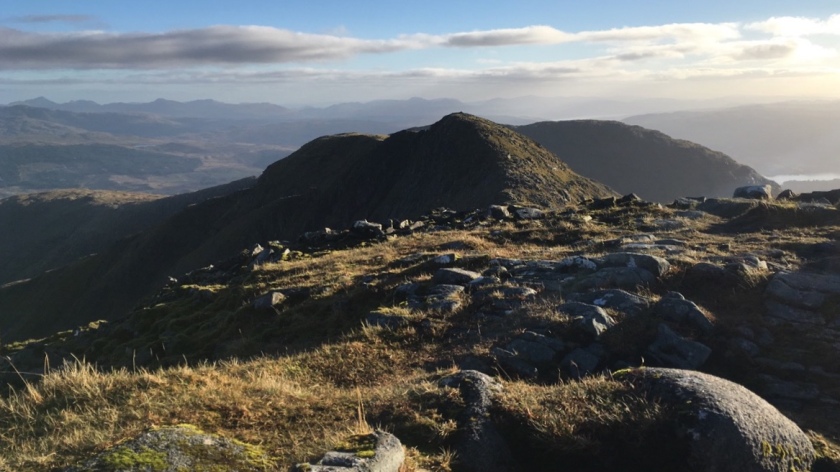 It is a relatively easy descent along a variety of paths that come together at the edge of a deep slanting ravine, followed by a walk out over the boggy slopes above the reservoir. But it is a long walk after a long day. There is brief respite from mud on the road from the dam, before the return to the path through the forest. It was not completely dark when we reached the car at 17:30, but almost.

The final week of wedding preparations presented a number of challenges, but everything happened more or less as planned. We had a beautiful day, and our guests all enjoyed themselves. A sudden squall of hail appeared at the venue just before the ceremony began, creating rainbows. Later a raven flew over – which is not a common sight in Fife.

I do not like to use vocabularies of struggle and battle in relation to the disease that is allegedly going to kill me, or at least, if there are battles to be fought, these are rather with the consequences of the diagnosis and my own responses and reactions, not with any disease. For the fact of the matter is that I am increasingly and absolutely doubting the prognostications of medical science, gradually understanding the wisdom of the Lama who suggested I give the disease no solidity. Getting married was the greatest affirmation of this. For I feel better now than I did five years ago and have no intention whatever of leaving this life for the foreseeable future. I am enjoying it far too much for that. I still have many more mountains to climb and new horizons to experience.