There is vigorous discussion among mountain people about which peaks are the most remote. There are many fine candidates, and I have visited a good few of them. Always in combination with an expedition of one or several nights out. In my youth I was never interested in getting to summits unless there was definitely going to be a view. I was more interested in traversing the land by means of its secret mountain passes and ancient drove roads. This experience of being out in the mountains for several days at a time is integral to my enjoyment. Even now, I much prefer to bag Munro’s from my tent, to live through the turning of the planet for as many days as is necessary.

Although the access to this little cluster is within easy driving distance from major centres of population, it would be a very long day’s walking to bag all four in one day. Many people use a bike and leave it at the no longer in use Culra Bothy before the eight or nine hour round trip along the ridge, and back over the bealach between it and the mighty Ben Alder. After which a drive home along the A9. This might cut three hours from the total time, but it would still make for a very long day. So no excuse not to go on an expedition.

These hills have been on my radar for a very long time. During the last few months I have been climbing the peaks to the west and north and I have seen them from many directions. On my first expedition out into the hills after my return from The Netherlands, I saw them from the plateau of Ben Alder as I marveled at what I could achieve in spite of the disease. I know too from previous journeys through here in my youth that there is plenty campground along the banks of the river Pattack. I took along a friend who has recently moved to Scotland from down south. He is ex military, a former outward bounds instructor, self contained, self disciplined and hardcore.

We walked away from Dalwhinnie at seven thirty in the evening in a cloud of midges and decided to make camp about a mile short of Culra about three hours later because it was getting difficult to see. But we found a comfortable grassy place on the river bank and pitched our tents in a sudden wind that blew away the midges. 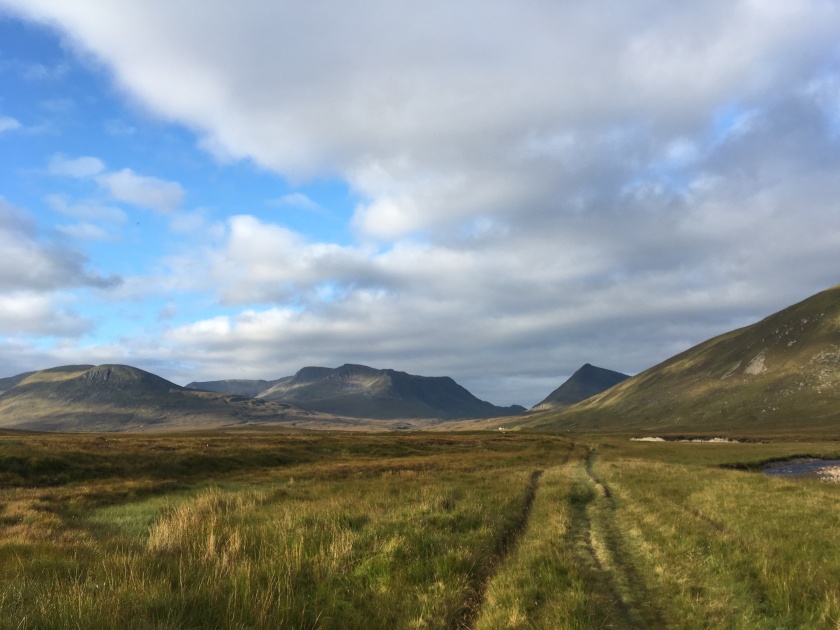 In the morning we awoke at six and were ready to leave at eight, fully breakfasted and packed up for the long day ahead. We walked past the bothy and up the slope behind a locked estate equipment store under a small dormant wind turbine. We reached the summit of Carn Dearg in less than two hours. 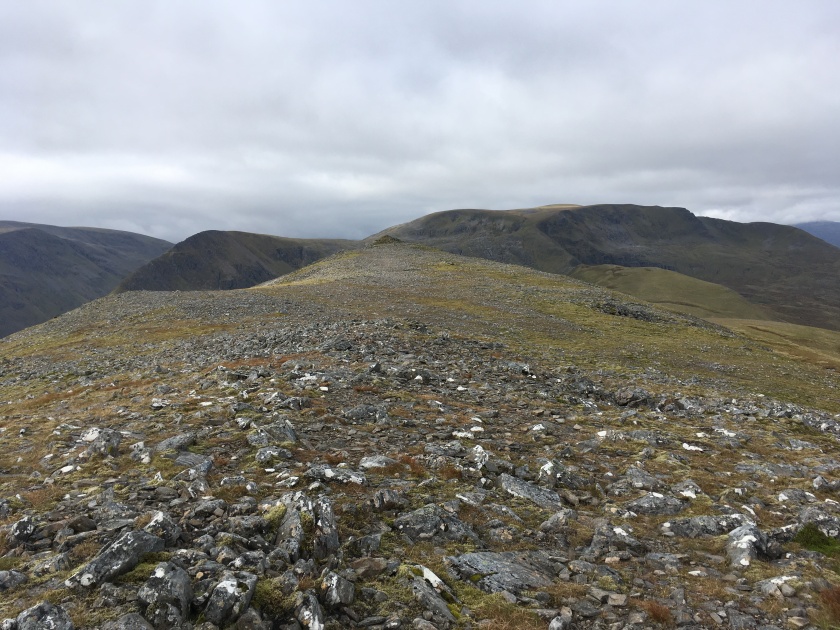 The mountains had not yet decided what to do with the air swirling among them. Mists formed in the glens, cloud blew past, skimming the top of Lancet Edge, partially obscuring the plateau of Geal-Charn. The sun continued to shine strong through gaps in the cloud. The wind was cold and penetrating. The traverse is straightforward but high and exposed. As we emerged onto the plateau of Geal-Charn the mists dispersed and the cloud base rose, revealing the enormity of the panorama. We arrived at the summit just after eleven thirty.

The traverse to the next two peaks is easy, dropping gently only two hundred meters or so between each. But the wind was burning cold. We sat awhile just after one o’clock in the lee of the summit of Beinn Eibhinn, eating lunch and chatting with others enjoying the remoteness of this ridge. In the distance the vastness of this land, visible here from its very heart, in every direction.

Remoteness in its common sense is relative, meaning a great distance from anywhere else. But there is a more absolute sense of remoteness here at the centre of the central highlands. The Cairngorms are a distant blip on the horizon. Creag Meaghaid is an insignificant lump. The crags, screes and pinnacles of the Aonach Eagach, The Mamores, The Nevis Ranges, Etive, Orchy, Bradalbane, Glen Shiel, Affric, Knoydart, all minor serrations. No sign of any sea. Only springs gushing clear pure water into rivers, gathering in glistening lochs surrounded by forests and moors. 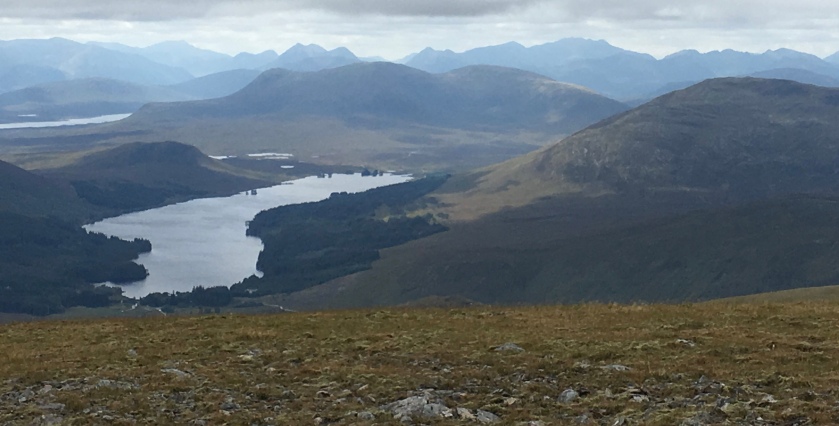 We descended the west ridge into the glen under Ben Alder and ploughtered about for a bit, crossing peat hags and burns before climbing through the heather to the ancient path round the mountain and back over the bealach towards Culra and the tents. 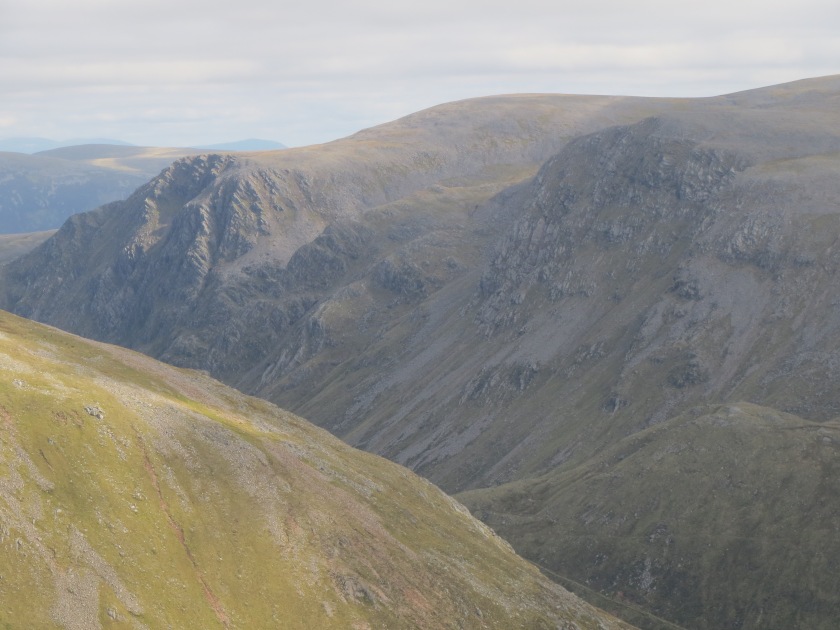 A marvelous walk under a blue sky dappled with clouds, surrounded by majestic crags and buttresses, affording splendid views back over Loch Ossian to the ridges of Glen Coe, tiny on the horizon. 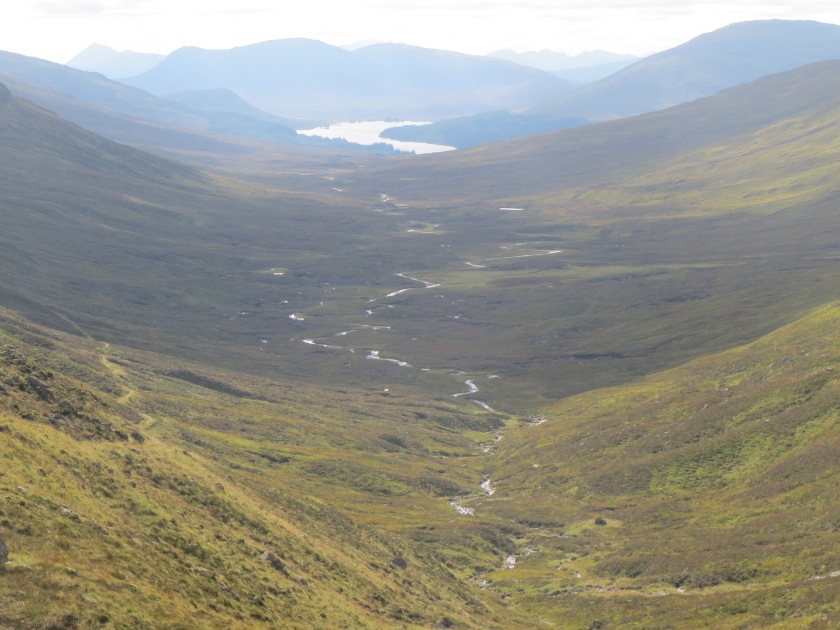 We stopped on the way for rest and reflection at a burn by the path, where a gentle wind kept off the midges. This is my favourite moment on any expedition. On the way back down, sitting by water meditating upon the day and whatever challenges it has presented, while gazing in awe at landscapes, sharing the silent benevolence of the land. 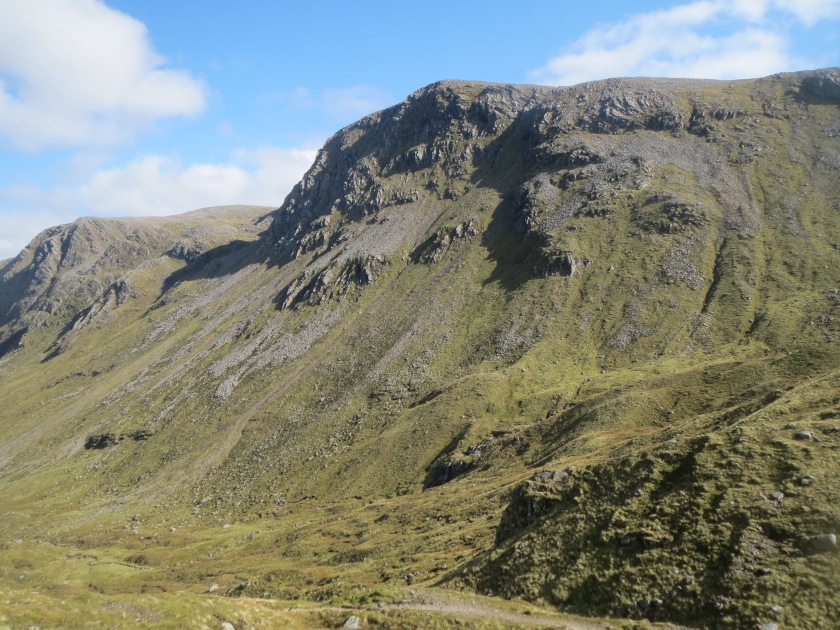 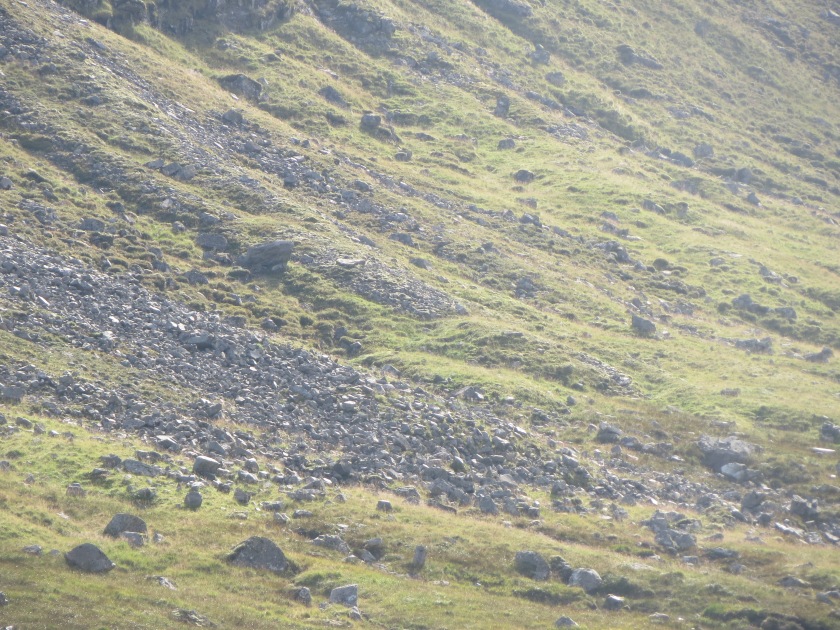 When we returned to our tents at about six, we decided that the grass a little further up the river was flatter and more suitable for camping, so we moved and prepared for the night. We awoke again at six and left, leaving no trace, at about eight, as a group of geldings came over to investigate our presence. 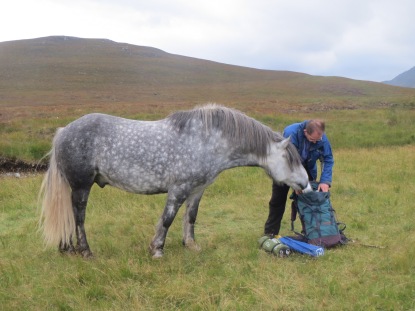 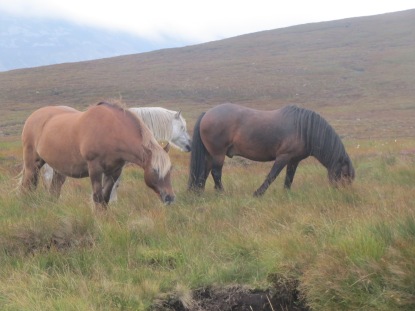 We were back at the car by eleven, taking the total walking time to about sixteen hours. Much better to have spread this over two days than crammed it all into one.

Many thanks to Chris for sharing this excellent expedition and for lots of very interesting conversation. 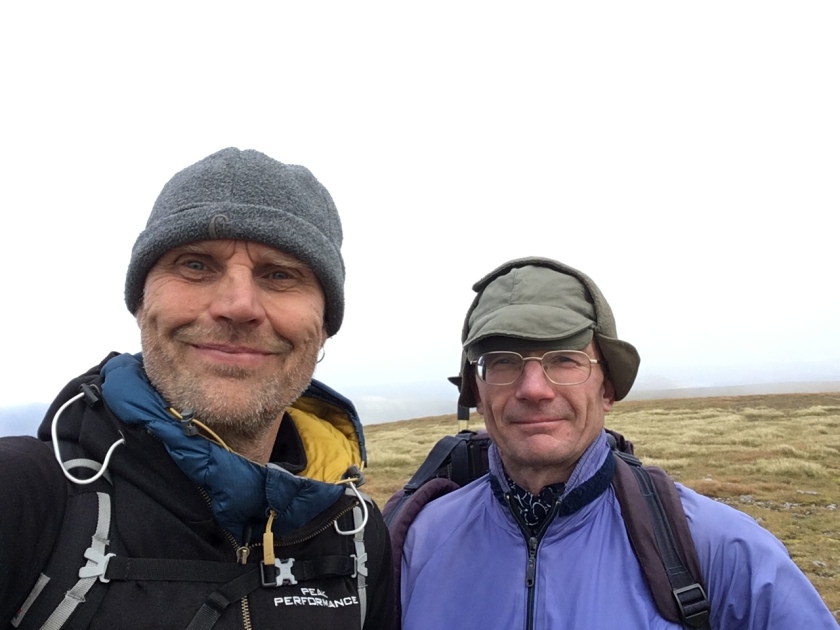