Sometimes people tell me that they would be frightened, alone in the mountains, particularly when camping out. My usual response is that there is nothing to fear except axe wielding maniacs. Sometimes I also have to ask when the last time was that they heard of an axe wielding maniac running amok in the Scottish Highlands.

There are of course often very good reasons for fear in the mountains. Circumstances do arise when a body is pumped up suddenly with the rush of adrenaline, when its heart beats faster, its breathing becomes more insistent, and its muscles tense, poised for immediate action. When a foothold becomes suddenly less stable than first seemed, when clouds billow up from nowhere to obscure all sight and confuse navigation, when a route turns out to be much more precipitous and scrambly than anticipated, rocks and grass can be slippery, many minor events can result in the natural reflex called fear. And all of these are overcome in subsequent moments, as circumstances change and the body in question moves on. Fear is at this level a natural and useful bodily response.

It is not however the same as the many fears that fester in an imagination and that have nothing to do with immediate circumstances or with any actual danger. These are the most complex and difficult emotions to understand and overcome. For they are built up over many years, from the first moments of experience, using resources available in the body politic – ideas, stories, rituals, habits of conduct, morals, images, language and so forth. Of course the physiologic responses and bodily changes are much the same, but these are triggered not by immediate conditions, but by an idea or a memory or some other notion of the mind.

At the beginning of the year I met a man and his dog on the way up Ben Dorian. We have become occasional mountain companions and friends. Not long ago, as we climbed the Munros on the Bidean nam Bian massif, he suggested that one day he guide me along the Aonach Eagach on the other side of the glen, which he had done several times before and wanted to do again. This ridge has a reputation that precedes it. It is regarded by some as the trickiest exposed ridge scramble on the Scottish mainland, although it is said by others to be quite straightforward in comparison to one or two Welsh and English ridges. When viewed from below, from within the cavernous basin of Glen Coe, traversing the Aonach Eagach appears to involve negotiating a mess of crags and narrow ridges, with sheer descents into dark clefts between protruding pinnacles and columns with no obvious route down from the top, if it ever became necessary to find one. Guidebooks warn of exposed scrambling and one or two technically difficult sections that need to be taken seriously. Mention is made of ropes.

Anybody who is engaged in this obsessive project to bag the Munros is always several steps ahead in the planning, and I have been aware of this ridge for some time, knowing that if I bottled out traversing it, I could always bag the two Munros it connects together independently from different starting points. More recently, I had been steeling myself, beginning to think that maybe I should give it a go – in spite of my occasional vertigo. So when I got a message from my companion suggesting a trip to the Aonach Eagach the following week, I did not immediately reject the idea, and knew, in fact, from the moment that I thought about doing it, seriously, without giving any influence to fears that might arise on the basis of its reputation, without being scared off by my imagination, that I would be there. And having clambered together up the Lost Valley to Bealach Dearg and then along the high ridges of Bidean before descending into the corrie in front of Stob Coire nan Lochan, I felt confident that my companion could be trusted when he told me that I would be fine. He also said he would bring a rope.

After an evening reading walk reports and watching YouTube videos of Aonach Eagach traverses, I decided I should stop because it was terrifying me. For the days before the trip, I was niggled by a fear of terrible accidents, but confident that there would be nothing to worry about, that my companion was right. After all, in spite of a few fatalities, many thousands of others have made the traverse without incident or mishap. 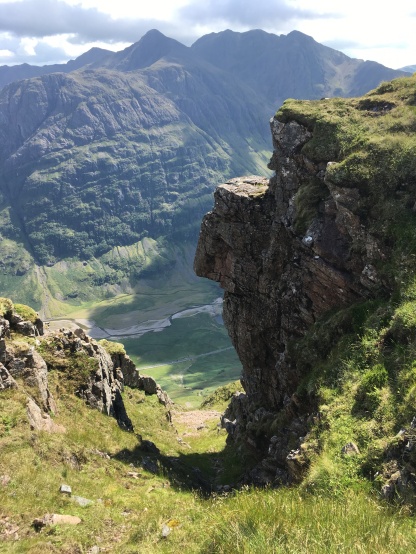 It was a glorious day to be in the mountains. Which meant that it was busy. As we walked up the path from the car park towards Am Bodach, others could be seen up ahead. At the summit I could see what I was about to experience. From this distance the ridges to the two Munro summits appear as sharp edged and smooth with very visible paths perched along the crests. The first difficulty is a steep descent of about 30 meters over stable rock with lots of foot and hand holds onto a narrow path on a sharp grassy ridge. My companion told me that he believed this to be the most technically difficult section. He went on before me to make sure my feet were well placed. At the first real ascent, up an enclosed gully, he told me to go on ahead. At the top he gave me some advice: climb first with your head, then your legs and then your arms; always know where your hand or foot is going to land before you move it; never have more than one hand or foot on the move at any one time. 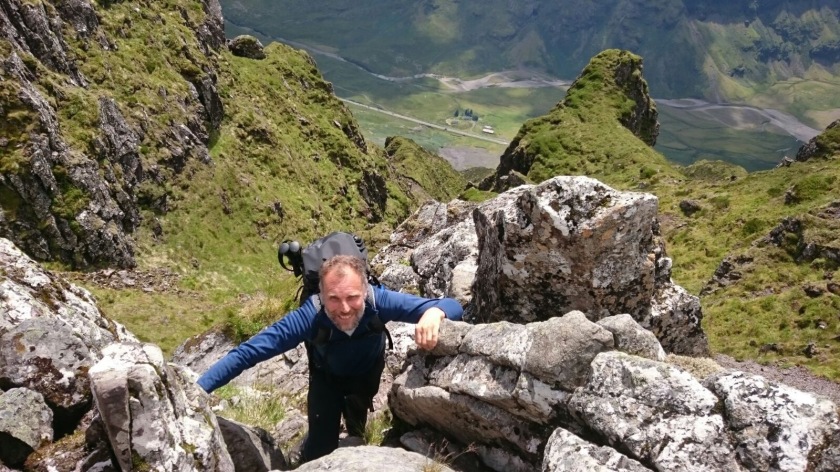 After that it was just practice. The route is very easy to follow, over shiny rocks, scarred with crampons and, where there is earth, along deep rutted paths. On the way there is a Munro with excellent views of the Mamores and Nevis ranges on one side and the enormous bulk of Bidean on the other, and at the end, another with views over Ballachullish to Sunart, Knoydart and Mull. There were a couple of moments along the way where I was briefly consumed by the screaming habdabs – particularly atop a section known as The Crazy Pinnacles, but I found that as long as I kept moving and remained mindful at every moment of where my limbs were clinging to the rocks, there was no fear at all. Eventually it was just like any other day out in the hills in good company. We chatted about stuff, admired the views – which are absolutely spectacular in all directions – and passed the time of day with the many others we met. And then, just as I thought it was all over, a brief wobble during the final descent into a dark narrow cleft where there was a queue of folks clinging to a ledge, waiting to stand on a narrow column projecting out of the void between two massive pinnacles, from which the route ascended again, up a steep gully out onto the ridge. But again, all fear dispersed as I scrambled up and out into safety. 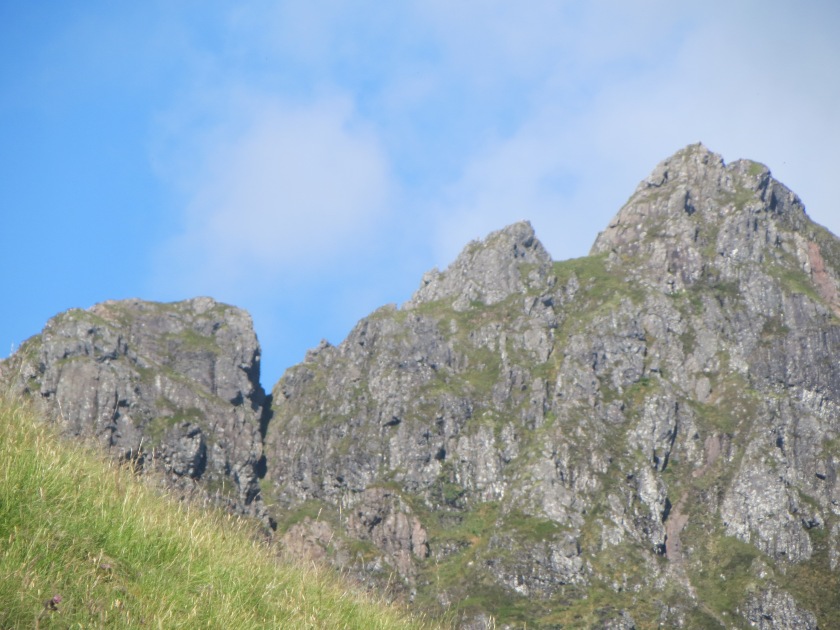 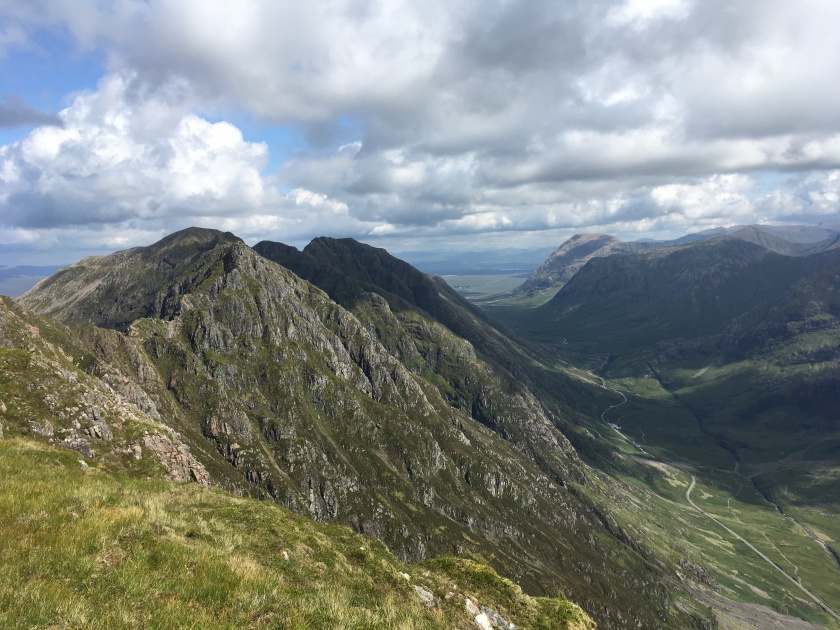 Looking back along the ridge, now having traversed its pinnacles I could see its serrations more clearly, that it is not smooth at all, and I understood why it is considered to be such a tough challenge. It is a sustained and intense scramble that requires commitment, attention and care at every step, it involves sometimes walking along a crest of rocks less than a meter wide with a sheer drop on either side and sometimes climbing up and down rock faces with a lot of air beneath. But the rock is stable, the route is obvious and it is nowhere near as scary being up there negotiating the pinnacles as sitting at home dreaming up disasters, anticipating accidents and imagining the worst. 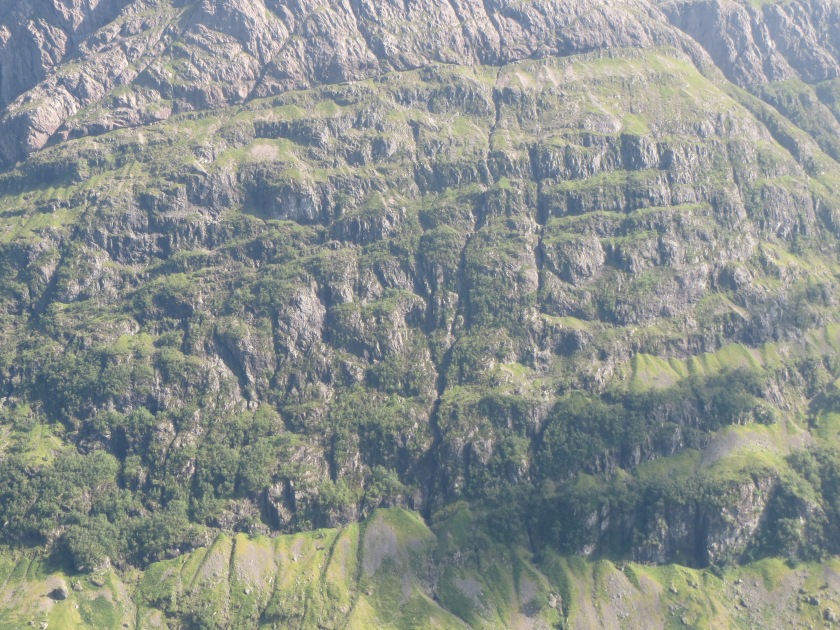 Quite near the start of the route, before the summit of Meall Dearg, there is a projecting spur known as The Chancellor, to which there is a path down from the main ridge. Just looking at that path was enough to make me silently weep in terror. And yet looking back along the ridge at the end of the route I was aware that actually walking along the top of the crazy pinnacles with thousands of feet of nothing on either side and climbing up and down precipitous rock faces did not at the time fill me with terror at all. Only now, reflecting back and remembering, can I discern any remnant of the fear I once experienced in anticipation of this journey.

I have always known that fear is largely imaginary, but I have not always been very good at not giving in to it, at preventing fear from motivating my conduct, colouring my judgement and obscuring the reality of what lies before me. Walking the Aonach Eagach left me with a sense of achievement, a great feeling of satisfaction that enables me more easily to contemplate Liathach or even The Skye Munros. And with this, an unfamiliar sense of disappointment, that if this is the toughest Munro scramble on the mainland, then I have nothing to achieve here now. Which of course would be to take far too narrow a view of achievement. For every journey into the mountains offers lessons. Walking the Aonach Eagach has relieved me of a burden, shown me how easy it is to be terrified by absolutely nothing. I am in touch now with a kind of clarity, more able to disconnect fear from all thoughts or emotions about what lies ahead, be it in the next moment or the unknown void faced by us all, more willing to trust that whatever lies along the path, no matter how dangerous it appears from a distance, no matter how exposed, it is well trodden and there is no need to be afraid. 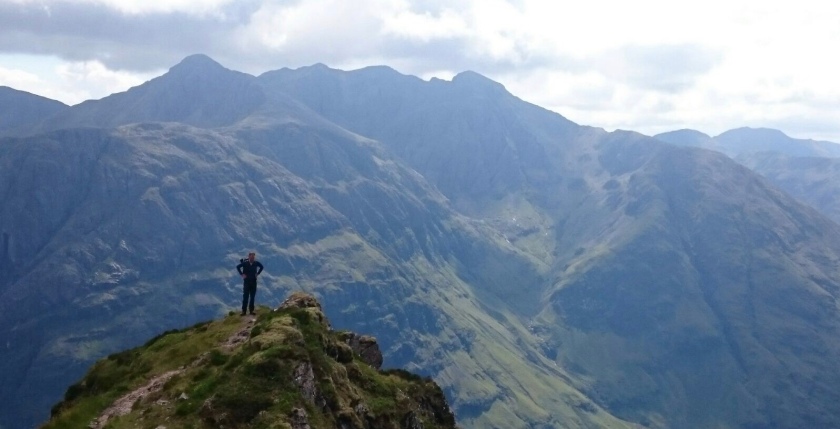 maxspilleroftea.wordpress.com/
Talking-up Scotland: Only here, comments like: 'I would add a cautionary note to your otherwise excellent point'