Since the start of 2017 I have sought the advice of two Buddhist teachers about how to deal with my condition. As I have often said, the effort is almost entirely mental – although this is now changing somewhat as I feel the effects of the medication not working any more.

I told the first, Tulku Ogyen Nyima, that I had come to see him because I had been impressed with an element of a teaching I once saw him giving – in Tibetan and translated simultaneously by an interpreter. He told me that he had forgotten now what he had then said, but that he would help me as he could. When I told him I was scared of the development of the disease and the dying it will bring, he told me there is nothing to be scared of. He offered some breathing exercises and told me about some books that would help me bring my mind to rest. He then wanted to know about what kind of philosopher I am, and so I explained my general position as best I could. My feeling is that our conversation would have been more extensive, had I been able to understand him expressing ideas in his native Tibetan. I took his advice though and obtained the books, which are very helpful. When I can, I also practice the breathing exercises he suggested with my meditation practice.

The second visit was together with my partner to a well-known Scottish Lama, whose attitude to cancer has been able in the past to help many others. He said he always forgets what he says, but he would help as he could. Immediately he told my partner that she has to stop asking me how I am, to stop in this way giving the disease any solidity. Then he turned to me and said that in a universe where everything changes, even cancer can change. I blurted out that I did not want to die, at which point he laughed in my face. Of course it is absurd to want not to die, and I responded rather defensively that I knew that one day I would die, but that now was just too soon. At which point he told me that I was not dead yet, that now I am very much alive. Which, in fact, is all I need to know really.

I do not now remember what exactly more was said, but I do know that, like the words of all wise people, this Lama’s words were seeds sewn deliberately to have an effect specifically on those to whom they are addressed. My partner and I both took away from the meeting a great deal to think about. More importantly we came away with a great sense of joy, for this Lama has the most beautiful happy smile and a very infectious laugh. The effects are still working their way through my consciousness as I continue my efforts to avoid the deterministic narrative of medical science, by which the progress of the disease will be inevitable and inexorable as it spreads throughout my body, and then kills me. This, at the same time as I am able still to climb mountains and experience the great wildernesses of this country. Freedom from this apparent contradiction comes with not giving the disease any solidity, by recognising and celebrating the demonstrable fact of now, of this experience of vitality and health, without allowing any idea of disease or any ancient metaphysical dogma about deterministic forces to overwhelm my life.

Contrary to popular opinion Karma does not mean that everything is laid out in advance, rather that we are all now, and always have been, active participants in the causes of things, so that sometimes our conduct is affected by forces of which we are as yet unconscious. Which means that we are never powerless, that for as long as we are alive we are free. We just need to train our minds to understand what this means.

In this context, the career as inspirational cancer patient I have built up since I decided to come out about my condition four years ago, will have to change. It would be too easy to become dependent on such an identity and perforce on the disease itself. More difficult perhaps, and yet also more healthy, to acknowledge the disease quietly but to concentrate on the ordinary business of being alive, not to give it any solidity. Not that I do not want to inspire people, to encourage others to get out there and experience the mountains, to develop the bodily habits, mental skills and common sense principles necessary to be alive in these places and that are otherwise embodied by the lives of Lamas and Tulkus. And so I have changed my attitude. I no longer climb mountains with cancer, neither in spite nor because of the disease, neither in order to struggle against it, nor to prove to myself that I am winning. I climb mountains because they are there.

It is many years since I have been up onto the Great Moss, a vast expanse of grassland, peat hag and rutting grounds that lies at around 3000ft on the south west corner of the Cairngorm plateau, surrounded by several of the highest mountains in the country. In the past I have come here from all directions; along the ridge of Sgòr an Dubh Mòr and Sgòr Gaoith, down from the high plateau of Einich Cairn, scrambling up the cliffs from Loch Einich, up the estate track from Glen Feshie, and along the length of the River Eidart from its confluence with the River Feshie. This time I took the easy way up from the car park at Achlean with my friend Chantal who has recently moved to Aviemore to work for Wilderness Scotland. We climbed Sgòr Gaoith together after which I went off to find a place for my tent and to climb Mullach Clach ‘a Bhlair before the sun went down.

I camped by a gurgling burn and in the morning walked due east towards the twin peaks of The Angel’s Peak and Cairn Toul – from where I was camped, a gentle stroll of about 7 km over easy ground on a very agreeable gradient. Unfortunately the view from the top of both peaks was of cloud and horizontal snow, and frustratingly, just as I was coming off the summits, the clouds cleared to reveal the sheer scale of these incredible mountains.

There is little more humbling in Scotland, more able to set one small life into perspective, than standing at a height of 1100 meters and looking up at peaks all around. If I had not been to these summits before and seen the vast chasm of the Lairig Ghru beyond them I would perhaps have returned just for the view. I was content though to admire the brief view I did get and to return back to my tent for warm food and rest.

It was already cold and I knew that the weather forecast predicted the temperature would drop further. After dark, the wind got up and it started to rain. Sometime later the noise on the tent changed and I knew the snow had arrived. For the first time in my life I did not go out into the night to answer a call of nature, but instead used one of my cooking pots. 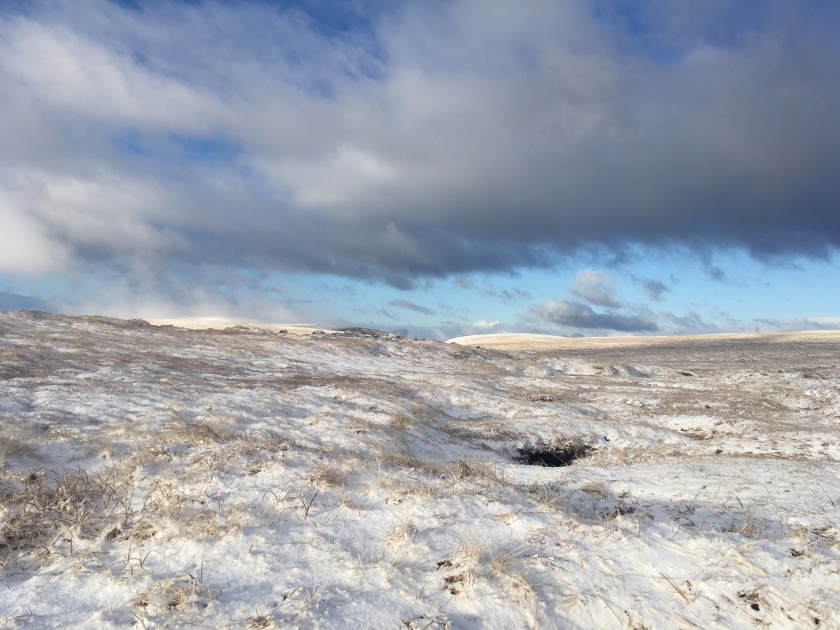 In the morning I punched off a layer of ice from the tent and got myself together slowly under blue skies filling up with squalls. I put on all of my clothes because it seemed like the best way of staying alive, and packed up the rest of my stuff to leave behind a dark patch in the snow, before heading back to the path to Achlean. 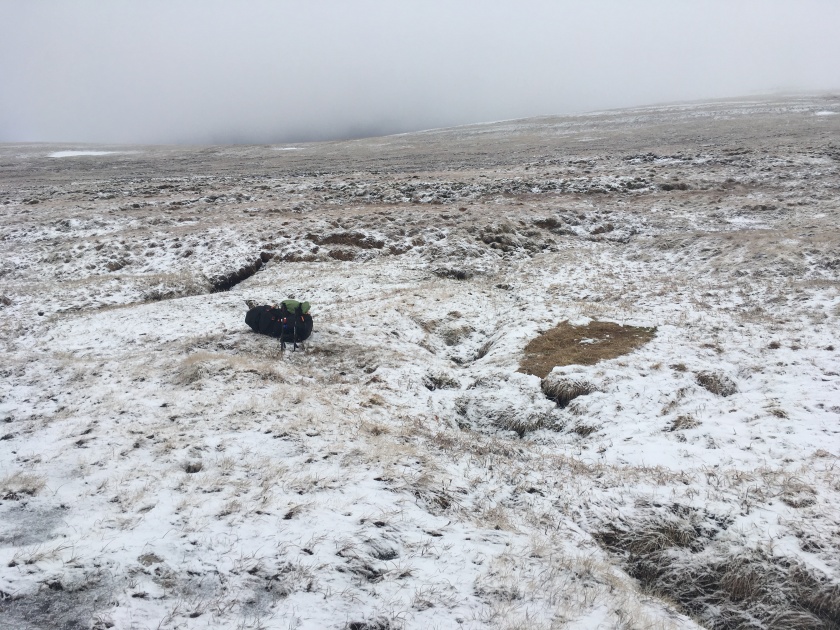 Great curtains of snow danced with the wind over the landscape, awaiting mountains high enough upon which to fall. By the time I was back in the woods of Glen Feshie, the snow was becoming more general, beginning to settle over the ground as if it were still winter.

For what it is worth, my total has risen now to 96 since I was diagnosed with cancer, and remains 112 during my lifetime. More importantly, I climbed four familiar peaks in a new way and reacquainted myself with this wonderful and unique environment. Cancer was not here.

7 thoughts on “The Great Moss”